Darwinistic Pressure in the Land of Cryptocurrency

For many just waking up to the burgeoning land of programmable decentralized value and trust, Bitcoin and cryptocurrency are synonymous. But while Bitcoin still leads in market capitalization over all cryptocurrencies, there is a noticeable secular decline in its percentage share over the years (Figure 1,2). Other token systems (aka alt coins) are being created for a variety of reasons, and people are investing in them alongside (or instead of) the venerable Bitcoin. Coinmarketcap tracks this ecosystem, currently noting 649 actively traded coins with 10 new coins added in just the past 2 weeks. With a minimal barrier to entry, it's no surprise that a new coin or two is born every day. Like mutated (potentially parasitic) offspring of the parent organism, most will die; this is especially true in the dynamic and harsh ecosystem that favors first movers and network effects. And while individual upstarts themselves struggle, collectively, they are beginning to assert a noticeable pressure on the incumbent Bitcoin itself to adapt. The most innovative technologies and approaches are getting developed by upstarts, and if Bitcoin cannot assimilate it will be eaten alive. Strap in. 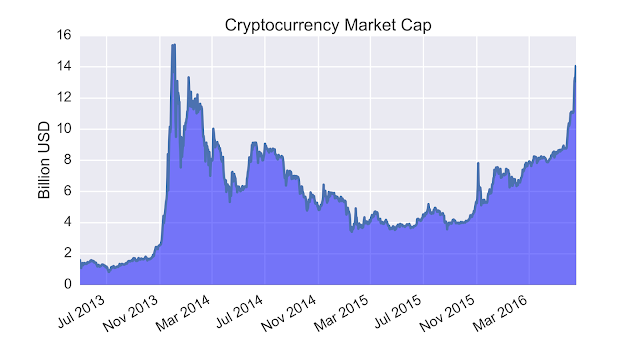 Figure 1: Market capitalization of the entire cryptocurrency ecosystem since May 2013 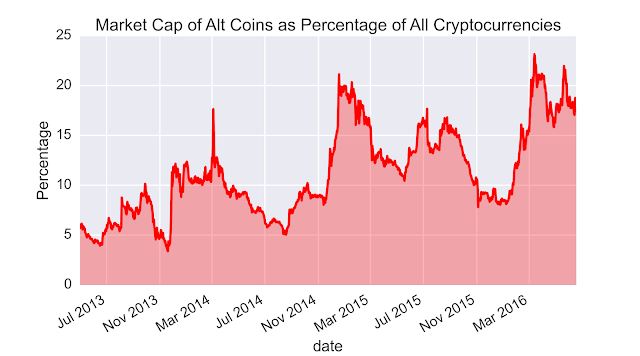 Figure 2: Percentage of total capitalization of non-Bitcoin cryptocurrencies (“alt coins”) since May 2013. Though noisy, it's clear that these other coins account for more and more relative value over time.

Coins die simply because people find they hold no value and/or trust (there are lots of reasons why people might think so). Likewise, there are many reasons to start new token systems, but apart from the nefarious, frivolous, humorous, and solipsistic, serious new systems try to address something that Bitcoin cannot, or does not do gracefully.  Of the Bitcoin variants, offering similar use cases as Bitcoin, some of the main differentiated offerings are:

Other coins act more like a vector and a fuel to some specific use cases not directly enabled by Bitcoin such as:

Some systems offer not just different protocol and reward features but different modes of conduct, like governance structures. Open source does not necessarily mean open decision making. For example, the structure of the Bitcoin core developer community and how decisions are made has been a subject of criticism and worry. In contrast, Ethereum, like Linux and Python, have an individual that acts as the final arbiter during disputes and is responsible for maintaining the vision of the project on long timescales. In times of crisis (cf. the recent DAO vulnerability) this sort of governance may or may not be a good thing.

“In business, there are many reasons that a product fails; technology is only one of the failure modes. The same is true in the land of cryptocurrency."

The central notion of alt coins, that tokens have value, might itself be disrupted. Fuel-less decentralized trust systems, like hyperleger, offer an orthogonal value set to alt coins. Whereas the implicit value of a crypto token is explicitly measured in its (supposed-efficient) market capitalization—and by extension its implied utility relative to other tokens should be knowable—token-less and private token systems are playing a different game. These systems have no fuel to burn (unlike Ethereum) and thus have no friction built into the decentralized transactions. There's no coin value to measure. Companies like IBM may instead be trying to capture value on hyperleger by offering products and services built on top. If value-centric crypto-token systems are the closed source operating systems of the 1970s and 1980s, value-less blockchains are the open-source *Nix OSs of today. With this lens, IBM might try to position itself to be the RedHat and Cloudera's of this new world. Torturing the analogy further, it's the birds taking flight to decouple from the competitive ecosystem on land.

Adopting the Innovations of Upstarts

In business, upstarts can build and develop in secret, meaning incumbents might not get to see a disruptive technology until it's too late. But in the land of cryptocurrency, almost all innovations are public. Code is pushed to open-source hubs like GitHub and discussions happen in the open on platforms like Slack. It has been no secret, for instance, that many alt coins are targeting Bitcoin's relatively slow settlement speeds and relative lack of anonymity. Proposals to change Bitcoin are discussed more or less out in the open. So upstarts are also exposed in real-time to the tactics of bohemians.

Adaptation was naturally built into Bitcoin and indeed the core code of Bitcoin is changing all the time. There is a formal process for improvements to be proposed, debated, coded, tested, and put into production. The Bitcoin Lightening network, for example, tries to directly address scalability and settlement time issues. By directly addressing some of the main concerns with Bitcoin, we see that the pressure to adapt is not just internal, but external as well.

A mom-and-pop bookstore should not be able to compete with Amazon.com these days, but bookstores are still around (albeit in smaller numbers). In some, they offer the same products but a fundamentally different shopping experience. In others, they are highly specialized and can serve the long-tail of interests without the need for economies of scale.

It is this sort of coexistence, despite the intense vying for dominance, that will emerge in the land of cryptocurrency. The winner-take-all future (one coin to rule them all!) simply doesn't make sense when we look at the vast complexity (and value) of the problems that cryptocurrencies seek to address. Within a “sector” there may indeed be winners and losers: Bitcoin may emerge as the de facto store of digital value, like gold (but it may not be a cash replacement that it was once thought to become). Litecoin might persist as silver to Bitcoin's gold. One coin may emerge as the token of choice for gamers and another may emerge as the one best suited for land/property titles.

This specialization (or speciation, wearing our Darwin hats) is a good thing. It allows each token to be focused on something it can do uniquely well. Bitcoin is currently trying to shore up a number of its (perceived) deficiencies but it does not need to adapt to the point where it becomes the best at everything in the crypto ecosystem.  Crypto tokens are also competing not just with each other but the broader macro world of fiat currency, sovereign debt, commodities, property value, etc.  To be sure, it may never replace some of these traditional stores/vectors of value.

Bitcoin enjoys first-mover, network effect, and marketing advantages over its competitors much like a dominant species.  But the first-mover and network effect enjoyed by MySpace did not prevent it from being overtaken by Facebook. Bitcoin is feeling the Darwinistic pressure to adapt and improve. If it does not, it will fail.  Indeed, continuous innovation in all forms (governance, algorithmic, user-friendliness, …) will determine who remains in the survival-of-the-fittest land of cryptocurrencies.

_Thanks to Charley Hine and Wayne Skeen who commented on an initial draft. _ Edit (Jun 20): BigchainDB is not full CRUD and is not fueled by a coin. Thanks, Trent McConaghy.