Wealth and Labor in the Cognitive Automation Era

Disruptive technologies have always been greeted with a concern—and many times a back reaction—by the institutions that they are, or are meant to, disrupt.  In the startup world, we think about disruption as replacing established technologies and ways of doing things with compelling (and better) alternatives, challenging incumbent market dominants. But disruption also means changing how people work, and therefore also means upheaval in labor markets.

Yesterday, in the Uncharted Forum here in Berkeley, I discussed artificial intelligence on stage with former Deputy Assistant Secretary of the Treasury Brad DeLong (also a professor with me at Berkeley). Uncharted is a new ideas-exchange event modeled in part after SXSW, Ted and Davos. The title of our session “I, for one, welcome our new robot overlords” was chosen by the organizers to be purposefully provocative. At the outset, I let people know that I think about robots not in terms of hardware, mechanization and physical automation, but in terms of cognitive augmentation and automation. Rather spend time discussing the algorithmic modeling of the human brain as a way to understand how it works (a la Hofstader), those of us using various forms of artificial intelligence in our work, we think about AI as a tool for mimicking and, more to the point, out-performing the cognitive tasks that would have been previously assigned to people. 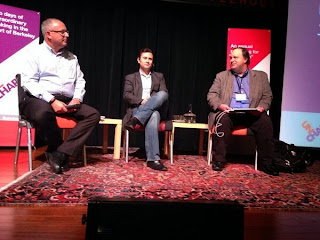 Lance Knobel, me, Brad DeLong on stage (from @UnchartedIdeas)

It's pretty clear from history that new technologies obviate the need for some existing jobs. In 1900, 41% of the labor force in the US was agricultural and now it's 2%. In the 1940s, there were half million jobs for telephone switching operators and those jobs are now almost completely gone. And, when was the last time you talked to a travel agent? But for all those displacements, new efficiencies, new wealth, and new industries are created. Mechanized farming drastically reduced food costs, automated switching was the precursor for the internet, and travel is now cheaper and more accessible than ever before. On these spillover effects following displacement, in a counterpoint to an&nbsp MIT Technology Review article called “How Technology is Destroying Jobs", Robert Atkinson writes:

Historically, the income-generating effects of new technologies have proved more powerful than the labor-displacing effects: technological progress has been accompanied not only by higher output and productivity, but also by higher overall employment.

Carl Bass, the CEO of Autodesk, spoke today about the hollowing out of the working class thanks to physical and construction automation. The real crux of yesterday's conversation was this: Are the coming upheavals to the labor force because of cognitive automation just another wave in technological disruption or is this time different, poised to do significant damage to an already weakened middle class?  For cognitive automation, essentially the supplanting of knowledge workers with software, the sights on the middle class (rather than say the lowerclass) is that artificial intelligence is poised to the replace jobs that require higher levels of education, problem solving skill sets, and intellect. Are we really going to decimate the professions of teachers, lawyers, doctors, CPAs?  It's clear that vast amounts of wealth can be unlocked with AI ($100B/year in healthcare, $450B/year with self-driving car adoption, etc.) but who are the losers and who are the winners? Will the labor force be able to react and adapt as it always has?

Luddites (those who fear that new technology will demote or even destroy us) have been consistently shown wrong since Socrates. So, I'll take this as a Bayesian prior and wager that the chicken-littles will also be wrong. But, as Vivek Wadhwa noted his discussion, the one obvious difference from past disruption is the pace of change. Instead of a generation to adapt, workers in disrupted industries may have less than a decade to react, reform, and pivot.  I think that this places the particular onus on training and education to be reactive to these grand shifts. Online courses may be such a mechanism to education on a massive scale (e.g., Coursera's first class in machine learning reportedly had more than 23,000 make substantial progress through the course, more than I'll ever teach in person in my lifetime). I've been teaching “Python for Data Science” at Berkeley as part of my small contribution. However, I think it's fair to say that in general the higher-education complex may very well lag behind in providing the requisite training for this era.

Another obvious place where policy can at least help level the playing field is in patent reform. Locking up IP will translate to locking up wealth with a special few. The enablement of spillover effects are an absolute requirement for disruption to become a net benefit to society and not a burden.

I'm curious to get everyone's thoughts on this.  My counterpart Brad DeLong wrote about this topic last week. Worth a read too!